Wayne Blake, a native of Jonesboro, AR was employed by the Foundation for forty (40) years and served on the Foundation board since 1996. He served as the Executive Vice President since 2001. Mr. Blake also served as a former Fire Fighter for 18 years with the Philadelphia Fire Department. Instructor for National/State Fire Training in Arkansas. Instructor for the American Red Cross and American Heart Association. He was a member of several civic clubs and also dedicated his time to serving as an Elder at the Southwest Church of Christ and overseeing the Food Ministry program. 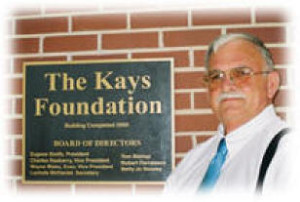 Wayne Blake served the Arkansas State College Foundation (Kays Foundation) from 1975 until his death in 2015. Working closely with V. H. “Bud” Kays, son of founder V. C. Kays, Wayne held positions as employee, director, and ultimately Executive Vice President and Treasurer. In his forty years of service, Wayne directed the day to day operations of the Foundation and implemented the vision of the Foundation Board with unwavering care and dedication surpassing mere duty.