Dec. 1, 2008 –The ASU-Jonesboro chapter of Alpha Tau Alpha (ATA), a national honorary organization in the field of agricultural education, recently completed a work project that should bring ‘pleasance’ to many people for years to come.

A ‘pleasance’ is defined as a place laid out as a pleasure garden or promenade. The author John Ruskin referred to “a secluded part of a garden” as in “the pleasances of old Elizabethan houses.” The Kays Foundation, housed on the northern part of the ASU campus, wanted to enhance its wooded location on the lake near the Pavilion for the enjoyment of those who strolled there. There was a lot of lovely landscaping, but only a gravel path. ATA came to the rescue, completing the job on Nov. 20.

ATA had been helped in the past by the Kays Foundation; they sought to repay the favor. According to Dr. David Agnew, associate professor of agricultural education at ASU-Jonesboro and the advisor for the university’s Alpha Gamma chapter of ATA, “One of the important activities of our program is the annual FFA Career Development Events (CDE). Each spring, ASU hosts the Eastern District Forestry CDE. The Kays Foundation has allowed us and FFA to use their property over the years to conduct this event. The Arkansas Forestry Commission has also been very instrumental in the CDE. The Forestry Commission and I have wanted to see the area around the pond near the Kays Foundation developed further, for example to see a walking trail as well as more trees planted and labeled.”

Agnew adds, “The Kays Foundation has helped us and we wanted to help them maintain the property and see it developed to its full potential. We hope everyone on campus and visitors to campus will benefit from the development of this property, that it will be a real asset for all of us to enjoy.”

Working to line the walkway with paving stones, Agnew says, “The main challenge was that it was just hard physical labor. The stones were heavy and rough. To place the landscaping stones along each side of the walkway, we had to first level the area and make sure that we were parallel from side to side. Of course, working in and around trees presented somewhat of a challenge,” says Agnew, adding, “Many of these ATA members will eventually become teachers of agriculture.”

The president of ASU-Jonesboro’s chapter of ATA is senior Dusty Key of Cabot. She says, “We wanted an opportunity to help enhance the look of the area around the Kays Foundation building, and we saw an opportunity to help out. We worked with the Forestry Commission to enhance the beauty of this area and make it more accessible to the public. We lined the walkway through the wooded area with stones to help the gravel from washing away, involving about a dozen people including ATA members, our ATA advisor, and a few from the Forestry Commission. We hope that all those who use this area in the future will enjoy the serenity and beauty of this area while having a peaceful stroll through the walkway.” 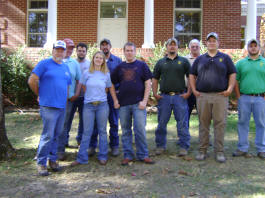 Some of the students who were involved in the project were Josh Pippenger of Bradford, ATA’s vice president, and Eddie Hendrix of Beebe, ATA secretary/treasurer, along with Marcus Orf of Calico Rock, Casey Wells of Paragould, Phillip Ives of Cave City and Lane Lenderman of Brookland along with Mat Simpson of the Arkansas Forestry Commission.

According to Wayne Blake, executive director of the Kays Foundation, “We thank ATA for their help in developing a walkway in the Kays Pleasances. With their volunteer help, the walkway will be a reality soon. When young people go the extra step to help someone else, it shows the world what our future leaders are made of. These young people worked hard and with a healthy outlook on life. The Kays Foundation is very grateful to ATA and the agricultural department led by David Agnew, along with the Arkansas Forestry Commission, for the work they have done to help establish the Pleasance area.”

The Kays Foundation provides grants and funding for Arkansas State University-Jonesboro to enhance efforts to achieve the teaching, research, and service goals and purposes of the university. The foundation traces its beginnings to 1911, when a group headed by A-State founding president V. C. Kays contributed funds to purchase livestock for the animal husbandry department. Though its official name was the Arkansas State College Foundation for the Advancement of Higher Education, it became known as the Kays Foundation in recognition of V. C. Kays and later his son, V. H. ‘Buddy’ Kays, who graduated from A-State in 1938. In succession, they led the foundation for ninety years. The current chairman of the board is Dr. Eugene W. Smith of Jonesboro, president emeritus of Arkansas State University-Jonesboro .